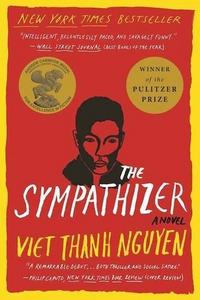 The Sympathizer is the 2015 debut novel by Vietnamese American professor Viet Thanh Nguyen. It is a best-selling novel and recipient of the 2016 Pulitzer Prize for Fiction. Its reviews have generally recognized its excellence, and it was named a New York Times Editor's Choice.The novel fits the expectations of a number of different novel genres: immigrant, mystery, political, metafiction, dark comedic, historical, spy, and war. The story depicts the anonymous narrator, a North Vietnamese mole in the South Vietnamese army, who stays embedded in a South Vietnamese community in exile in the United States. While in the United States, the narrator describes being an expatriate and a cultural advisor on the filming of an American film, closely resembling Platoon and Apocalypse Now, before returning to Vietnam as part of a guerrilla raid against the communists. The dual identity of the narrator, as a mole and immigrant, and the Americanization of the Vietnam War in international literature are central themes in the novel. The novel was published 40 years to the month after the fall of Saigon, which is the initial scene of the book.On February, 2020, the author, Viet Thanh Nguyen said on his Facebook account that the sequel, The Committed, has been done with the writing and is now under the editing process.
Read more or edit on Wikipedia