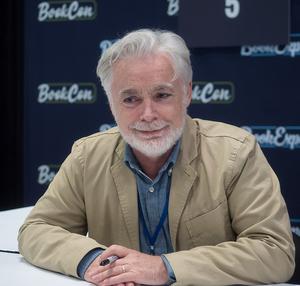 Eoin Colfer (; born 14 May 1965) is an Irish author of children's books. He worked as a primary school teacher before he became a full-time writer. He is best known for being the author of the Artemis Fowl series. In September 2008, Colfer was commissioned to write the sixth instalment of the Hitchhiker's Guide to the Galaxy series, titled And Another Thing ..., which was published in October 2009. In October 2016, in a contract with Marvel Comics, he released Iron Man: The Gauntlet. He served as Laureate na nÓg (Ireland's Children's Laureate) between 2014 and 2016.
Read more or edit on Wikipedia