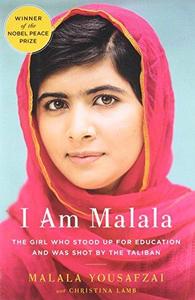 I Am Malala: The Story of the Girl Who Stood Up for Education and was Shot by the Taliban is an autobiographical book by Malala Yousafzai, co-written with Christina Lamb. It was published on 8 October 2013, by Weidenfeld & Nicolson in the UK and Little, Brown and Company in the US. The book details the early life of Yousafzai, her father's ownership of schools and activism, the rise and fall of the Tehrik-i-Taliban Pakistan in Swat Valley and the assassination attempt made against Yousafzai on 9 October 2012, when she was aged 15, following her activism for female education. It received a positive critical reception and won several awards, though it has been banned in many schools in Pakistan.
Read more or edit on Wikipedia