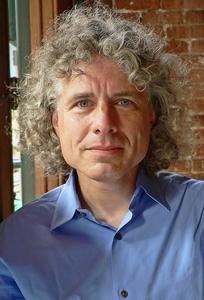 Steven Arthur Pinker (born September 18, 1954) is a Canadian-American cognitive psychologist, psycholinguist, popular science author and public intellectual. He is an advocate of evolutionary psychology and the computational theory of mind.Pinker is the Johnstone Family Professor of Psychology at Harvard University, and his academic specializations are visual cognition and developmental linguistics. His experimental subjects include mental imagery, shape recognition, visual attention, children's language development, regular and irregular phenomena in language, the neural bases of words and grammar, as well as the psychology of cooperation and communication, including euphemism, innuendo, emotional expression, and common knowledge. He has written two technical books that proposed a general theory of language acquisition and applied it to children's learning of verbs. In particular, his work with Alan Prince published in 1989 critiqued the connectionist model of how children acquire the past tense of English verbs, positing that children use default rules, such as adding -ed to make regular forms, sometimes in error, but are obliged to learn irregular forms one by one. Pinker is also the author of nine books for general audiences. The Language Instinct (1994), How the Mind Works (1997), Words and Rules (2000), The Blank Slate (2002), and The Stuff of Thought (2007) describe aspects of psycholinguistics and cognitive science, and include accounts of his own research, positing that language is an innate behavior shaped by natural selection and adapted to our communication needs. Pinker's The Sense of Style (2014) is a general language-oriented style guide. Pinker's book The Better Angels of Our Nature (2011) posits that violence in human societies has generally steadily declined over time, and identifies six major trends and five historical forces of this decline, the most important being the humanitarian revolution brought by the Enlightenment and its associated cultivation of reason. Enlightenment Now (2018) elaborates this argument by using social science data to show a general improvement of the human condition over recent history brought by reason, science and humanism. The nature and importance of reason is further explored in his next book Rationality: What It Is, Why It Seems Scarce, Why It Matters (2021). In 2004, Pinker was named in Time's "The 100 Most Influential People in the World Today", and in the years 2005, 2008, 2010, and 2011 in Foreign Policy's list of "Top 100 Global Thinkers". Pinker was also included in Prospect Magazine's top 10 "World Thinkers" in 2013. He has won awards from the American Psychological Association, the National Academy of Sciences, the Royal Institution, the Cognitive Neuroscience Society, and the American Humanist Association. He delivered the Gifford Lectures at the University of Edinburgh in 2013. He has served on the editorial boards of a variety of journals, and on the advisory boards of several institutions. Pinker was the chair of the Usage Panel of the American Heritage Dictionary from 2008 to 2018.
Read more or edit on Wikipedia