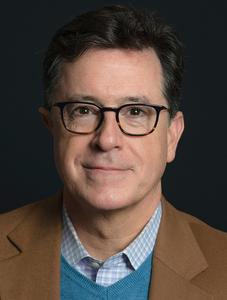 Stephen Tyrone Colbert ( kohl-BAIR; born May 13, 1964) is an American comedian, writer, producer, political commentator, actor, and television host. He is best known for hosting the satirical Comedy Central program The Colbert Report from 2005 to 2014 and the CBS talk program The Late Show with Stephen Colbert beginning in September 2015.Colbert originally studied to be a dramatic actor, but became interested in improvisational theater while attending Northwestern University, where he met Second City director Del Close. Colbert first performed professionally as an understudy for Steve Carell at Second City Chicago, where his troupe mates included Paul Dinello and Amy Sedaris, comedians with whom he developed the sketch comedy series Exit 57. He wrote and performed on the short-lived Dana Carvey Show before collaborating with Sedaris and Dinello again on the cult television series Strangers with Candy. He gained attention for his role on the latter as closeted gay history teacher Chuck Noblet. Colbert's work as a correspondent on Comedy Central's news-parody series The Daily Show gained him wide recognition. In 2005, he left The Daily Show to host The Colbert Report. Following The Daily Show's news-parody concept, The Colbert Report was a parody of personality-driven political opinion shows including The O'Reilly Factor, in which he portrayed a caricatured version of conservative political pundits, earning Colbert an invitation to perform as featured entertainer at the White House Correspondents' Association Dinner in 2006, which he did in character. This event led to the series becoming one of Comedy Central's highest-rated series. After ending The Colbert Report, he was hired in 2015 to succeed retiring David Letterman as host of the Late Show on CBS. He hosted the 69th Primetime Emmy Awards in September 2017. Colbert has won nine Primetime Emmy Awards, two Grammy Awards, and three Peabody Awards. Colbert was named one of Time's 100 Most Influential People in 2006 and 2012. Colbert's book, I Am America (And So Can You!), was listed No. 1 on The New York Times Best Seller list in 2007.
Read more or edit on Wikipedia