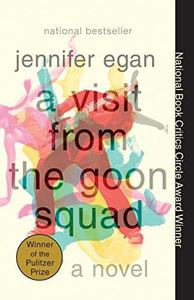 A Visit from the Goon Squad

A Visit from the Goon Squad is a 2011 Pulitzer Prize-winning work of fiction by American author Jennifer Egan. The book is a set of thirteen interrelated stories with a large set of characters all connected to Bennie Salazar, a record company executive, and his assistant, Sasha. The book centers on the mostly self-destructive characters, who, as they grow older, are sent in unforeseen, and sometimes unusual, directions by life. The stories shift back and forth in time from the 1970s to the present and into the near future. Many of the stories take place in and around New York City, although other settings include San Francisco, Italy, and Kenya. In addition to winning the Pulitzer Prize, the book also won the National Book Critics Circle Award for fiction in 2010. The novel received mostly positive reviews from critics and later appeared in many lists of the best fiction works of the 2010s.
Read more or edit on Wikipedia