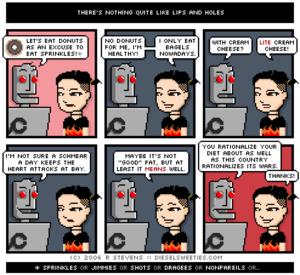 Webcomics (also known as online comics or Internet comics) are comics published on a website or mobile app. While many are published exclusively on the web, others are also published in magazines, newspapers, or comic books. Webcomics can be compared to self-published print comics in that anyone with an Internet connection can publish their own webcomic. Readership levels vary widely; many are read only by the creator's immediate friends and family, while some of the largest claim audiences well over one million readers. Webcomics range from traditional comic strips and graphic novels to avant garde comics, and cover many genres, styles, and subjects. They sometimes take on the role of a comic blog. The term web cartoonist is sometimes used to refer to someone who creates webcomics.
Read more or edit on Wikipedia