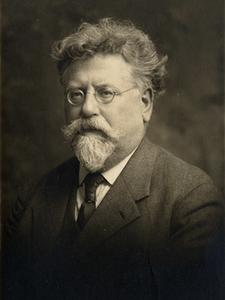 Johann Rudolf Rocker (March 25, 1873 – September 19, 1958) was a German anarchist writer and activist. He was born in Mainz to a Roman Catholic artisanal family. His father died when he was a child, and his mother when he was in his teens, so he spent some time in an orphanage. As a youth he worked as a cabin boy on river boats and was then apprenticed as a typographer. He became involved in trade unionism and joined the Social Democratic Party of Germany (SPD) before coming under the influence of anarchists such as Mikhail Bakunin and Peter Kropotkin. With other libertarian youth, he was expelled from the SPD, and his anarchist activism led to him fleeing Germany for Paris, where he came into contact with syndicalist and Jewish anarchist ideas and practices. In 1895, he moved to London. Apart from brief spells in Liverpool and elsewhere, he remained in East London for most of the next two decades, acting a key figure in the Yiddish-language anarchist scene there, including editing the Arbeter Fraynd periodical, publishing the key thinkers of anarchism, and organising strikes in the garment industry. In London, he formed a life partnership with Milly Witkop, a Ukraine-born anarchist from a Yiddish background. During World War I, he was interned as an enemy alien and at the end the war he was deported to the Netherlands. In the 1920s, he was mainly based in Germany, where he was one of the architects of the syndicalist Free Workers' Union of Germany (FAUD) and its organ Der Syndikalist and a founder of the International Workers Association (IWA). He became increasingly concerned with the rise of nationalism and fascism (he began work on his magnum opus Nationalism and Culture in this period) and left Germany in 1933 for the United States. In the US, he was active with the Yiddish Freie Arbeiter Stimme group, and was particularly involved in libertarian education and in solidarity with the Spanish Revolution and its fascist and Stalinist enemies. His classics Nationalism and Culture and Anarcho-Syndicalism were published in the 1930s. Having opposed both sides in First World War, as an anti-fascist he supported the Allies in the Second World War. After the war, he published Pioneers of American Freedom, a series of essays detailing the history of liberal and anarchist thought in the United States, seeking to debunk the idea that radical thought was foreign to American history and culture and had merely been imported by immigrants. On September 10, 1958, Rocker died in the Mohegan Colony.
Read more or edit on Wikipedia