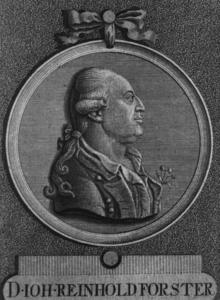 Johann Reinhold Forster (22 October 1729 – 9 December 1798) was a Reformed (Calvinist) pastor and naturalist of partially Scottish descent who made contributions to the early ornithology of Europe and North America. He is best known as the naturalist on James Cook's second Pacific voyage, where he was accompanied by his son Georg Forster. These expeditions promoted the career of Johann Reinhold Forster and the findings became the bedrock of colonial professionalism and helped set the stage for the future development of anthropology and ethnology. They also laid the framework for general concern about the impact that alteration of the physical environment for European economic expansion would have on exotic societies.
Read more or edit on Wikipedia