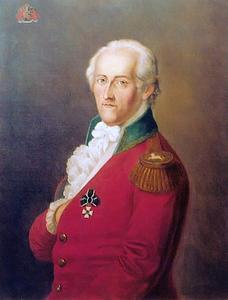 Freiherr Adolph Franz Friedrich Ludwig Knigge (16 October 1752 – 6 May 1796) was a German writer, Freemason, and a leading member of the Order of the Illuminati. Knigge was born in Bredenbeck (now a part of Wennigsen, Lower Saxony) in the Electorate of Hanover as a member of the lesser nobility. When he was barely eleven, his mother died, and when his father died three years later the teenager inherited a large debt. His creditors took possession of the family property and assigned the boy a meagre pension of 500 thalers.He studied law from 1769 to 1772 in Göttingen where he became a member of Corps Hannovera. He was allegedly initiated into Freemasonry in 1772 in Kassel, where he held a position as Court Squire (hofjunker) and Assessor of the War and Domains Exchequer. In 1777 he became Chamberlain at the Weimar court. In 1780 Knigge joined Adam Weishaupt's Bavarian Illuminati and his work with the Illuminati gave the group a great deal of publicity and influence of Masonic chapters. But in 1783 dissensions arose between Knigge and Weishaupt, which resulted in Knigge's final withdrawal from the group on 1 July 1784. Knigge stated that he could no longer endure Weishaupt's pedantic domineering, which frequently assumed offensive forms. He accused Weishaupt of "Jesuitism", and suspected him of being "a Jesuit in disguise" (Nachtr., I, 129). "And was I", he adds, "to labour under his banner for mankind, to lead men under the yoke of so stiff-necked a fellow?—Never!" Knigge's involvement with the Illuminati, support of the advancement of human rights, and a period of serious illness led to the loss of support of his aristocratic sponsors and finally his fortune. Knigge found a measure of financial stability again with a position in Bremen in 1790. He died in Bremen in 1796. In Germany, Knigge is best remembered for his book Über den Umgang mit Menschen (On Human Relations), a treatise on the fundamental principles of human relations that has the reputation of being the authoritative guide to behaviour, politeness, and etiquette. The work is more of a sociological and philosophical treatise on the basis of human relations than a how-to guide on etiquette, but the German word “Knigge” has come to mean “good manners” or books on etiquette.
Read more or edit on Wikipedia 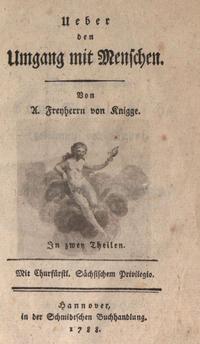 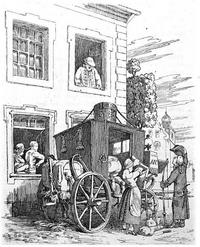