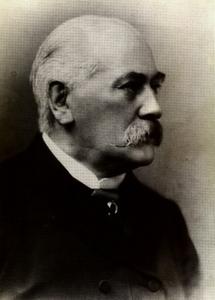 Heinrich Karl Brugsch (also Brugsch-Pasha) (18 February 1827 – 9 September 1894) was a German Egyptologist. He was associated with Auguste Mariette in his excavations at Memphis. He became director of the School of Egyptology at Cairo, producing numerous very valuable works and pioneering the decipherment of Demotic, the simplified script of the later Egyptian periods.
Read more or edit on Wikipedia