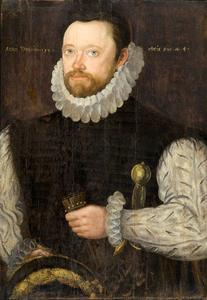 country of citizenship: Kingdom of England
language of expression: English
educated at: Hart Hall
occupation: writer, politician
position held: Member of Parliament in the Parliament of England, Member of the 1589 Parliament

Reginald Scot (or Scott) (c. 1538 – 9 October 1599) was an Englishman and Member of Parliament, the author of The Discoverie of Witchcraft, which was published in 1584. It was written against the belief in witches, to show that witchcraft did not exist. Part of its content exposes how (apparently miraculous) feats of magic were done, and the book is often deemed the first textbook on conjuring.
Read more or edit on Wikipedia

The Discoverie of Witchcraft

partially sceptical book published by Reginald Scot in 1584, intended as an exposé of early Modern witchcraft; contains a small section intended to show how the public was fooled by charlatans