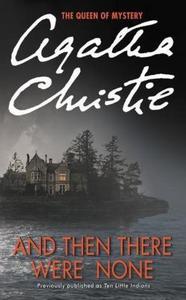 And Then There Were None

And Then There Were None is a mystery novel by English writer Agatha Christie, described by her as the most difficult of her books to write. It was first published in the United Kingdom by the Collins Crime Club on 6 November 1939, as Ten Little Niggers, after the minstrel song, which serves as a major plot point.The US edition was released in January 1940 with the title And Then There Were None, which is taken from the last five words of the song. All successive American reprints and adaptations use that title, except for the Pocket Books paperbacks published between 1964 and 1986, which appeared under the title Ten Little Indians. The book is the world's best-selling mystery, and with over 100 million copies sold is one of the best-selling books of all time. Publications International lists the novel as the sixth best-selling title.
Read more or edit on Wikipedia

And Then There Were None

And then there were none

And there were giants in the land