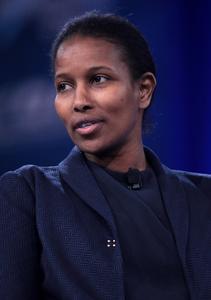 Ayaan Hirsi Ali (; Dutch: [aːˈjaːn ˈɦiːrsi ˈaːli] (listen); Somali: Ayaan Xirsi Cali: Ayān Ḥirsī 'Alī; born Ayaan Hirsi Magan, 13 November 1969) is a Somali-born Dutch-American activist, feminist, author, scholar and former politician. She received international attention as a critic of Islam and advocate for the rights and self-determination of Muslim women, actively opposing forced marriage, honor killing, child marriage and female genital mutilation. She has founded an organisation for the defense of women's rights, the AHA Foundation. Ayaan Hirsi Ali works for the Hoover Institution and the American Enterprise Institute.In 2003, Hirsi Ali was elected a member of the House of Representatives, the lower house of the States General of the Netherlands, representing the centre-right People's Party for Freedom and Democracy (VVD). A political crisis related to the validity of her Dutch citizenship—namely the accusation that she had lied on her application for political asylum—led to her resignation from parliament, and indirectly to the fall of the second Balkenende cabinet in 2006. Hirsi Ali is a former Muslim who became an atheist and has been a vocal critic of Islam. In 2004, she collaborated on a short film with Theo van Gogh, titled Submission, which depicted oppression of women under fundamentalist Islamic law, and was critical of the Islamic canon itself. The film led to controversy and death threats. Van Gogh was then murdered several days after the film's release by Mohammed Bouyeri, a Moroccan-Dutch Islamic terrorist. Hirsi Ali maintains that "Islam is part religion, and part a political-military doctrine, the part that is a political doctrine contains a world view, a system of laws and a moral code that is totally incompatible with our constitution, our laws, and our way of life." In her book Heretic (2015) she calls for a reformation of Islam by defeating the Islamists and supporting reformist Muslims.In 2005, Hirsi Ali was named by Time magazine as one of the 100 most influential people in the world. She has also received several awards, including a free speech award from the Danish newspaper Jyllands-Posten, the Swedish Liberal Party's Democracy Prize, and the Moral Courage Award for commitment to conflict resolution, ethics, and world citizenship. Critics accuse Ali of having built her political career on Islamophobia, and question her scholarly credentials "to speak authoritatively about Islam and the Arab world". Her works have been accused of using neo-Orientalist portrayals and of being an enactment of the colonial "civilizing mission" discourse. Hirsi Ali married British historian Niall Ferguson in 2011, migrated to the United States and became a U.S. citizen in 2013.
Read more or edit on Wikipedia