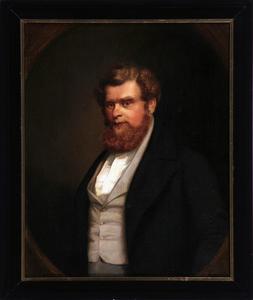 Robert Blum (10 November 1807 – 9 November 1848) was a German democratic politician, publicist, poet, publisher, revolutionist and member of the National Assembly of 1848. In his fight for a strong, unified Germany he opposed ethnocentrism and it was his strong belief that no one people should rule over another. As such he was an opponent of the Prussian occupation of Poland and was in contact with the revolutionists there. Blum was a critic of antisemitism, supported the German Catholic sect, and agitated for the equality of the sexes. Although claiming immunity as a member of the National Assembly, he was arrested during a stay at the hotel "Stadt London" in Vienna and executed for his role in the Revolutions of 1848 in the German states.
Read more or edit on Wikipedia