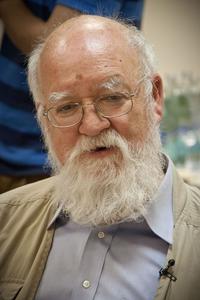 Daniel Clement Dennett III (born March 28, 1942) is an American philosopher, writer, and cognitive scientist whose research centers on the philosophy of mind, philosophy of science, and philosophy of biology, particularly as those fields relate to evolutionary biology and cognitive science.As of 2017, he is the co-director of the Center for Cognitive Studies and the Austin B. Fletcher Professor of Philosophy at Tufts University. Dennett is a member of the editorial board for The Rutherford Journal.
Read more or edit on Wikipedia