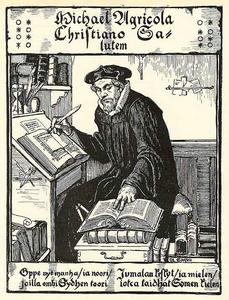 Mikael Agricola (Finnish: [ˈmikɑel ˈɑɡrikolɑ] (listen); c. 1510 – 9 April 1557) was a Finnish Lutheran clergyman who became the de facto founder of literary Finnish and a prominent proponent of the Protestant Reformation in Sweden, including Finland, which was a Swedish territory at the time. He is often called the "father of literary Finnish". Agricola was consecrated as the bishop of Turku (Åbo) in 1554, without papal approval. He continued the reform of the Finnish church (then a part of the Church of Sweden) along Lutheran lines. He translated the New Testament into Finnish and also produced the prayer book and hymns used in Finland's new Lutheran Church. This work set the rules of orthography that are the basis of modern Finnish spelling. His thorough work is particularly remarkable in that he accomplished it in only three years. He died of sudden illness while returning from a trip during which he assisted in negotiating the Treaty of Novgorod with the Tsardom of Russia.
Read more or edit on Wikipedia