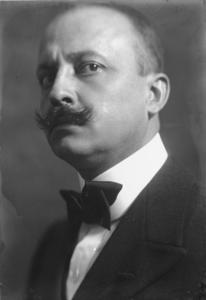 Filippo Tommaso Emilio Marinetti (Italian: [fiˈlippo tomˈmaːzo mariˈnetti]; 22 December 1876 – 2 December 1944) was an Italian poet, editor, art theorist, and founder of the Futurist movement. He was associated with the utopian and Symbolist artistic and literary community Abbaye de Créteil between 1907 and 1908. Marinetti is best known as the author of the first Futurist Manifesto, which was written and published in 1909, and as a co-author of the Fascist Manifesto, in 1919.
Read more or edit on Wikipedia