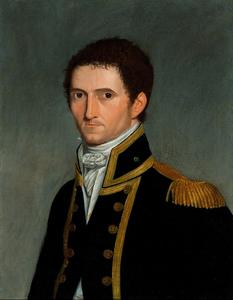 Captain Matthew Flinders (16 March 1774 – 19 July 1814) was a British navigator and cartographer who led the first inshore circumnavigation of the landmass that is now known as Australia. He is also credited as being the first person to utilise the name Australia to describe the entirety of that continent including Van Diemen's Land (now Tasmania), a title he regarded as being "more agreeable to the ear" than previous names such as Terra Australis.Flinders was involved in several voyages of discovery between 1791 and 1803, the most famous of which are the circumnavigation of Australia and an earlier expedition when he and George Bass confirmed that Van Diemen's Land was an island. While returning to Britain in 1803, Flinders was arrested by the French governor at Isle de France (Mauritius). Although Britain and France were at war, Flinders thought the scientific nature of his work would ensure safe passage, but he remained under arrest for more than six years. In captivity, he recorded details of his voyages for future publication, and put forward his rationale for naming the new continent 'Australia', as an umbrella term for New Holland and New South Wales – a suggestion taken up later by Governor Macquarie. Flinders' health had suffered, however, and although he returned to Britain in 1810, he did not live to see the success of his widely praised book and atlas, A Voyage to Terra Australis. The location of his grave was lost by the mid-19th century but archaeologists, excavating a former burial ground near London's Euston railway station for the High Speed 2 (HS2) project, announced in January 2019 that his remains had been identified.
Read more or edit on Wikipedia