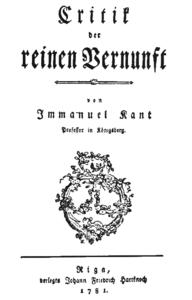 The Critique of Pure Reason (Kritik der reinen Vernunft) (1781; second edition 1787) is a book by the German philosopher Immanuel Kant, in which the author seeks to determine the limits and scope of metaphysics. Also referred to as Kant's "First Critique", it was followed by the Critique of Practical Reason (1788) and the Critique of Judgment (1790). In the preface to the first edition, Kant explains that by a "critique of pure reason" he means a critique "of the faculty of reason in general, in respect of all knowledge after which it may strive independently of all experience" and that he aims to reach a decision about "the possibility or impossibility of metaphysics". Kant builds on the work of empiricist philosophers such as John Locke and David Hume, as well as rationalist philosophers such as Gottfried Wilhelm Leibniz and Christian Wolff. He expounds new ideas on the nature of space and time, and tries to provide solutions to the skepticism of Hume regarding knowledge of the relation of cause and effect and that of René Descartes regarding knowledge of the external world. This is argued through the transcendental idealism of objects (as appearance) and their form of appearance. Kant regards the former "as mere representations and not as things in themselves", and the latter as "only sensible forms of our intuition, but not determinations given for themselves or conditions of objects as things in themselves". This grants the possibility of a priori knowledge, since objects as appearance "must conform to our cognition ... which is to establish something about objects before they are given to us". Knowledge independent of experience Kant calls "a priori" knowledge, while knowledge obtained through experience is termed "a posteriori". According to Kant, a proposition is a priori if it is necessary and universal. A proposition is necessary if it could not possibly be false, and so cannot be denied without contradiction. A proposition is universal if it is true in all cases, and so does not admit of any exceptions. Knowledge gained a posteriori through the senses, Kant argues, never imparts absolute necessity and universality, because it is always possible that we might encounter an exception.Kant further elaborates on the distinction between "analytic" and "synthetic" judgments. A proposition is analytic if the content of the predicate-concept of the proposition is already contained within the subject-concept of that proposition. For example, Kant considers the proposition "All bodies are extended" analytic, since the predicate-concept ('extended') is already contained within—or "thought in"—the subject-concept of the sentence ('body'). The distinctive character of analytic judgements was therefore that they can be known to be true simply by an analysis of the concepts contained in them; they are true by definition. In synthetic propositions, on the other hand, the predicate-concept is not already contained within the subject-concept. For example, Kant considers the proposition "All bodies are heavy" synthetic, since the concept 'body' does not already contain within it the concept 'weight'. Synthetic judgments therefore add something to a concept, whereas analytic judgments only explain what is already contained in the concept. Prior to Kant, it was thought that all a priori knowledge must be analytic. Kant, however, argues that our knowledge of mathematics, of the first principles of natural science, and of metaphysics, is both a priori and synthetic. The peculiar nature of this knowledge cries out for explanation. The central problem of the Critique is therefore to answer the question: "How are synthetic a priori judgements possible?" It is a "matter of life and death" to metaphysics and to human reason, Kant argues, that the grounds of this kind of knowledge be explained.Though it received little attention when it was first published, the Critique later attracted attacks from both empiricist and rationalist critics, and became a source of controversy. It has exerted an enduring influence on Western philosophy, and helped to bring about the development of German idealism. The book is considered a culmination of several centuries of early-modern philosophy and an inauguration of modern philosophy.
Read more or edit on Wikipedia