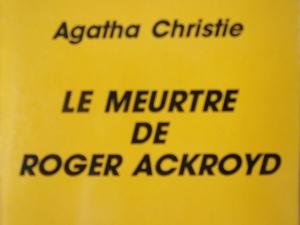 The Murder of Roger Ackroyd

The Murder of Roger Ackroyd is a work of detective fiction by British writer Agatha Christie, first published in June 1926 in the United Kingdom by William Collins, Sons and in the United States by Dodd, Mead and Company. It is the third novel to feature Hercule Poirot as the lead detective. Poirot retires to a village near the home of a friend, Roger Ackroyd, to pursue a project to perfect vegetable marrows. Soon after, Ackroyd is murdered and Poirot must come out of retirement to solve the case. The novel was well-received from its first publication. In 2013, the British Crime Writers' Association voted it the best crime novel ever. It is one of Christie's best known and most controversial novels, its innovative twist ending having a significant impact on the genre. Howard Haycraft included it in his list of the most influential crime novels ever written. The short biography of Christie which is included in 21st century UK printings of her books calls it her masterpiece, although writer and critic Robert Barnard has written that he considers it a conventional Christie novel.
Read more or edit on Wikipedia

One of the best murder mysteries of all times.