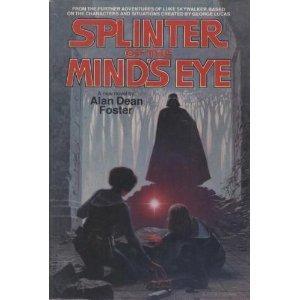 Splinter of the Mind's Eye

Splinter of the Mind's Eye is a science-fiction novel written by Alan Dean Foster as a sequel to the film Star Wars (1977). Originally published in 1978 by Del Rey, a division of Ballantine Books, the book was written with the intention of being adapted as a low-budget sequel to Star Wars in the event that the original film was not successful enough to spawn the franchise it would ultimately go on to produce.Splinter of the Mind's Eye was the first full-length Star Wars novel with an original storyline to be published after the release of the original film, and is thus considered, alongside Marvel's initial comic series, to mark the beginning of the Star Wars Expanded Universe.The story focuses on Luke Skywalker and Princess Leia, who are marooned together on the world of Mimban, where they encounter the locals and struggle against the forces of the evil Galactic Empire, including Darth Vader.
Read more or edit on Wikipedia