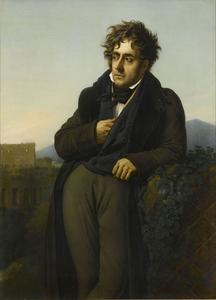 Mémoires d'Outre-Tombe (English: Memoirs from Beyond the Grave) is the memoir of François-René de Chateaubriand (1768–1848), collected and published posthumously in two volumes in 1849 and 1850, respectively. Chateaubriand was a writer, politician, diplomat, and historian who is regarded as the founder of French Romanticism. Although the work shares characteristics with earlier French "memoirs" (like the Memoirs of Saint-Simon), the Mémoires d'Outre-Tombe are also inspired by the Confessions of Jean-Jacques Rousseau: in addition to providing a record of political and historical events, Chateaubriand includes details of his private life and his personal aspirations. The work abounds in instances of the poetic prose at which Chateaubriand excelled. On the other hand, the melancholy of the autobiography helped establish Chateaubriand as the idol of the young French Romantics; a young Victor Hugo wrote: "I will be Chateaubriand or nothing."
Read more or edit on Wikipedia