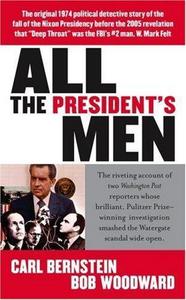 All the President's Men

All the President's Men is a 1974 non-fiction book by Carl Bernstein and Bob Woodward, two of the journalists who investigated the June 1972 break-in at the Watergate Office Building and the resultant political scandal for The Washington Post. The book chronicles the investigative reporting of Woodward and Bernstein from Woodward's initial report on the Watergate break-in through the resignations of Nixon Administration officials H. R. Haldeman and John Ehrlichman in April 1973, and the revelation of the Oval Office Watergate tapes by Alexander Butterfield three months later. It relates the events behind the major stories the duo wrote for the Post, naming some sources who had previously refused to be identified for their initial articles, notably Hugh Sloan. It also gives detailed accounts of Woodward's secret meetings with his source Deep Throat, whose identity was kept hidden for over 30 years. Gene Roberts, the former executive editor of The Philadelphia Inquirer and former managing editor of The New York Times, has called the work of Woodward and Bernstein "maybe the single greatest reporting effort of all time."A film adaptation, produced by Robert Redford, starring Redford and Dustin Hoffman as Woodward and Bernstein, respectively, was released in 1976. That same year, a sequel to the book, The Final Days, was published, which chronicled the last months of Richard Nixon's presidency, starting around the time their previous book ended.
Read more or edit on Wikipedia