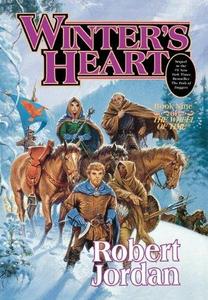 Winter's Heart a fantasy novel by American author Robert Jordan, the ninth book of his series Wheel of Time. It was published by Tor Books and released on November 7, 2000. Upon its release, it immediately rose to the #1 position on the New York Times hardcover fiction bestseller list, making it the second Wheel of Time book to reach the #1 position on that list. It remained on the list for the next two months. Winter's Heart consists of a prologue and 35 chapters. The book's title is a reference to the increasing coldness of Rand al'Thor's personality and to the return of winter following the reversal in the previous book, The Path of Daggers, of the unnatural heat caused by the Dark One's manipulation of climate. Winter's Heart was the first Wheel of Time book for which the prologue, entitled "Snow", was first sold as an ebook in advance of the physical release of the book. "Snow" was released by the Scribner imprint of Simon & Schuster in September 2000, two months before the publication of Winter's Heart.
Read more or edit on Wikipedia