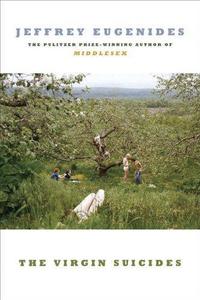 The Virgin Suicides is a 1993 debut novel by the American author Jeffrey Eugenides. The fictional story, which is set in Grosse Pointe, Michigan during the 1970s, centers on the lives of five sisters, the Lisbon girls. The novel is written in first person plural from the perspective of an anonymous group of teenage boys who struggle to find an explanation for the Lisbons' deaths. The novel's first chapter appeared in The Paris Review in 1990, and won the 1991 Aga Khan Prize for Fiction. Eugenides told 3am Magazine: "I think that if my name hadn't been Eugenides, people wouldn't have called the narrator a Greek chorus". The novel was adapted into a 1999 movie by director Sofia Coppola, and starring Kirsten Dunst.
Read more or edit on Wikipedia