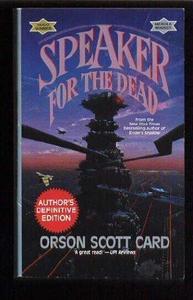 Speaker for the Dead

Speaker for the Dead is a 1986 science fiction novel by American writer Orson Scott Card, an indirect sequel to the 1985 novel Ender's Game. The book takes place around the year 5270, some 3,000 years after the events in Ender's Game. However because of relativistic space travel at near-light speed Ender himself is only about 35 years old. This is the first book to describe the Starways Congress, a high standpoint legislation for the human space colonies, and the Hundred Worlds, the planets with human colonies that are tightly intertwined by Ansible technology which enables instantaneous communication across any distance. Like Ender's Game, the book won the Nebula Award in 1986 and the Hugo Award in 1987. Speaker for the Dead was published in a slightly revised edition in 1991. It was followed by Xenocide and Children of the Mind.
Read more or edit on Wikipedia