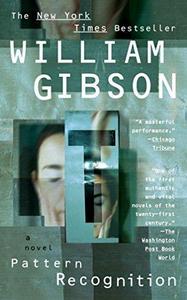 Pattern Recognition is a novel by science fiction writer William Gibson published in 2003. Set in August and September 2002, the story follows Cayce Pollard, a 32-year-old marketing consultant who has a psychological sensitivity to corporate symbols. The action takes place in London, Tokyo, and Moscow as Cayce judges the effectiveness of a proposed corporate symbol and is hired to seek the creators of film clips anonymously posted to the internet. The novel's central theme involves the examination of the human desire to detect patterns or meaning and the risks of finding patterns in meaningless data. Other themes include methods of interpretation of history, cultural familiarity with brand names, and tensions between art and commercialization. The September 11, 2001 attacks are used as a motif representing the transition to the new century. Critics identify influences in Pattern Recognition from Thomas Pynchon's postmodern detective story The Crying of Lot 49. Pattern Recognition is Gibson's eighth novel and his first one to be set in the contemporary world. Like his previous work, it has been classified as a science fiction and postmodern novel, with the action unfolding along a thriller plot line. Critics approved of the writing but found the plot unoriginal and some of the language distracting. The book peaked at number four on the New York Times Best Seller list, was nominated for the 2003 British Science Fiction Association Award, and was shortlisted for the 2004 Arthur C. Clarke Award and Locus Awards.
Read more or edit on Wikipedia