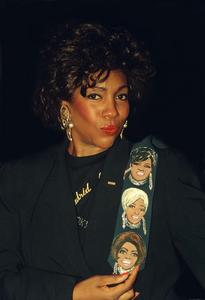 American vocalist and founding member of The Supremes

Mary Wilson (March 6, 1944 – February 8, 2021) was an American singer. She gained worldwide recognition as a founding member of The Supremes, the most successful Motown act of the 1960s and the best-charting female group in U.S. chart history, as well as one of the best-selling girl groups of all-time. The trio reached number one on Billboard's Hot 100 with 12 of their singles, ten of which feature Wilson on backing vocals. Wilson remained with the group following the departures of the other three original members Barbara Martin (in 1962), Florence Ballard (in 1967), and Diana Ross (in 1970), though the subsequent group disbanded following Wilson's own departure in 1977. Wilson later became a New York Times best-selling author in 1986 with the release of her first autobiography, Dreamgirl: My Life as a Supreme, which set records for sales in its genre, and later for the autobiography Supreme Faith: Someday We'll Be Together. Continuing a successful career as a concert performer in Las Vegas, Wilson also worked in activism, fighting to pass Truth in Music Advertising bills and donating to various charities. Wilson was inducted along with Ross and Ballard (as members of the Supremes) into the Rock and Roll Hall of Fame in 1988.
Read more or edit on Wikipedia