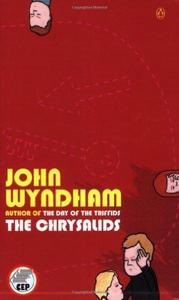 The Chrysalids (United States title: Re-Birth) is a science fiction novel by British writer John Wyndham, first published in 1955 by Michael Joseph. It is the least typical of Wyndham's major novels, but regarded by some as his best. An early manuscript version was entitled Time for a Change.The novel was adapted for BBC radio by Barbara Clegg in 1982, with a further adaptation by Jane Rogers in 2012. It was also adapted for the theatre by playwright David Harrower in 1999.
Read more or edit on Wikipedia