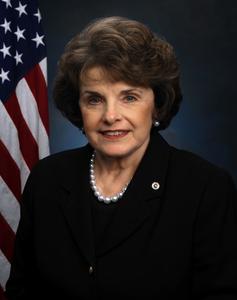 Dianne Goldman Berman Feinstein ( FYNE-styne; born Dianne Emiel Goldman; June 22, 1933) is an American politician who has served as the senior United States Senator from California since 1992. A member of the Democratic Party, she was mayor of San Francisco from 1978 to 1988.Born in San Francisco, Feinstein graduated from Stanford University in 1955. In the 1960s, she worked in local government in San Francisco. Feinstein was elected to the San Francisco Board of Supervisors in 1969. She served as the board's first female president in 1978, during which time the assassinations of Mayor George Moscone and City Supervisor Harvey Milk by Dan White drew national attention. Feinstein succeeded Moscone as mayor and became the first woman to serve in that position. During her tenure, she led the renovation of the city's cable car system and oversaw the 1984 Democratic National Convention. Despite a failed recall attempt in 1983, Feinstein was a very popular mayor and was named the most effective mayor by City & State in 1987.After losing a race for governor in 1990, Feinstein won a 1992 special election to the U.S. Senate. The special election was triggered by the resignation of Pete Wilson, who defeated her in the 1990 gubernatorial election. Despite being first elected on the same ballot as her peer Barbara Boxer, Feinstein became California's first female U.S. senator, as she was elected in a special election and sworn in before Boxer. She became California's senior senator in 1993 when Alan Cranston retired and was replaced by Boxer. Feinstein has been reelected five times and in the 2012 election received 7.86 million votes – the most popular votes in any U.S. Senate election in history.Feinstein authored the 1994 Federal Assault Weapons Ban, which expired in 2004. She introduced a new assault weapons bill in 2013 that failed to pass. Feinstein is the first woman to have chaired the Senate Rules Committee and the Senate Intelligence Committee, and the first woman to have presided over a U.S. presidential inauguration. She was the ranking member of the Senate Judiciary Committee from 2017 to 2021 and has chaired the International Narcotics Control Caucus since 2021, previously chairing the latter from 2009 to 2015. At 88, Feinstein is the oldest sitting U.S. senator. On March 28, 2021, Feinstein became the longest-serving U.S. senator from California, surpassing Hiram Johnson. Upon Barbara Mikulski's retirement in January 2017, Feinstein became the longest-tenured female senator currently serving; should she serve through November 5, 2022, Feinstein will surpass Mikulski's record as the longest-tenured female senator. In January 2021, Feinstein filed the initial Federal Election Commission paperwork needed to seek reelection in 2024, when she will be 91. Feinstein's staff later clarified that this was due to election law technicalities, and did not indicate her intentions in 2024.
Read more or edit on Wikipedia