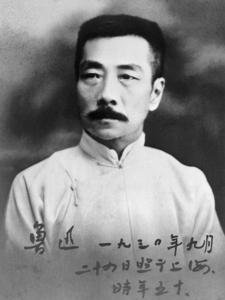 Zhou Shuren (25 September 1881 – 19 October 1936), better known by his pen name Lu Xun (or Lu Sun, Wade–Giles: Lu Hsün), was a Chinese writer, essayist, poet, and literary critic. He was a leading figure of modern Chinese literature. Writing in vernacular Chinese and classical Chinese, he was a short story writer, editor, translator, literary critic, essayist, poet, and designer. In the 1930s, he became the titular head of the League of Left-Wing Writers in Shanghai. Lu Xun was born into a family of landlords and government officials in Shaoxing, Zhejiang; the family's financial resources declined over the course of his youth. Lu aspired to take the imperial civil service exam, but due to his family's relative poverty he was forced to attend government-funded schools teaching "Western education." Upon graduation, Lu went to medical school in Japan but later dropped out. He became interested in studying literature but was eventually forced to return to China because of his family's lack of funds. After returning to China, Lu worked for several years teaching at local secondary schools and colleges before finally finding a job at the Republic of China Ministry of Education. After the 1919 May Fourth Movement, Lu Xun's writing began to exert a substantial influence on Chinese literature and popular culture. Like many leaders of the May Fourth Movement, he was primarily a leftist. He was highly acclaimed by the Chinese government after 1949, when the People's Republic of China was founded, and Mao Zedong himself was a lifelong admirer of Lu Xun's writing. Though sympathetic to socialist ideals, Lu Xun never joined the Communist Party of China.
Read more or edit on Wikipedia