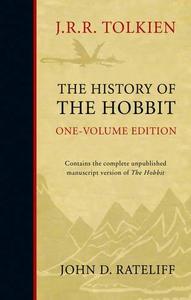 The History of The Hobbit

The History of The Hobbit is a two-volume study of J. R. R. Tolkien's 1937 novel The Hobbit. It was published by HarperCollins in May and June 2007 in the United Kingdom, with both volumes released in the United States by Houghton Mifflin on 21 September 2007; a boxed set combining The Hobbit with The History of The Hobbit was released on 26 October 2007. A single volume edition was released on 27 October 2011. The two-volume work contains Tolkien's unpublished drafts of the novel, with commentary by John D. Rateliff. It also details Tolkien's various revisions to The Hobbit, including abandoned revisions for the unpublished third edition of the work, intended for 1960, as well as previously unpublished original maps and illustrations drawn by Tolkien himself.
Read more or edit on Wikipedia