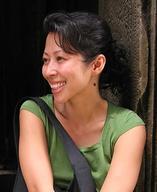 Loung Ung (Khmer: អ៊ឹង លួង; born 19 November 1970) is a Cambodian American human-rights activist, lecturer, and national spokesperson for the Campaign for a Landmine-Free World, between 1997 and 2003. She served in the same capacity for the International Campaign to Ban Landmines, which is affiliated with the Vietnam Veterans of America Foundation. Born in Phnom Penh, Cambodia, Ung was the sixth of seven children and the third of four girls to Seng Im Ung and Ay Choung Ung. At the age of 10, she escaped from Cambodia as a survivor of what became known as "the Killing Fields" during the reign of Pol Pot's Khmer Rouge regime. After emigrating to United States and assimilating, she wrote two books which related to her life experiences from 1975 through 2003. Source: Wikipedia (en)