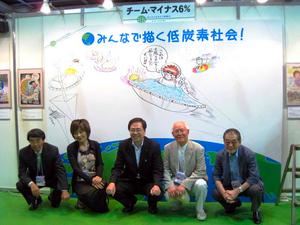 Tetsuya Chiba (千葉 徹彌 or ちばてつや, Chiba Tetsuya, born January 11, 1939) is a Japanese manga artist famous for his sports stories. He was born in Chuo, Tokyo, Japan, but lived most of his early childhood in Shenyang, Liaoning when northeast China was colonized by Japan during the Second Sino-Japanese War. His father was working in a paper factory when they lived in China. Two of his younger brothers are manga artists: Akio Chiba, and Shigeyuki Chiba who is almost completely unknown outside Japan, despite writing many popular sports manga in Japan. Shigeyuki Chiba works under the pen name Taro Nami. Chiba's works include Ashita no Joe, his best known work, and Notari Matsutarō. Many of his early titles are still in print due to continued popularity. He lives in Nerima, Tokyo.
Read more or edit on Wikipedia