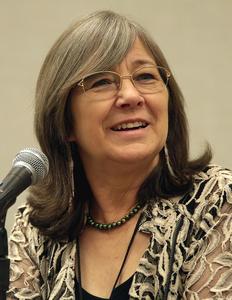 Margaret Astrid Lindholm Ogden (born March 5, 1952), better known by her pen names Robin Hobb and Megan Lindholm, is an American writer. Her work spans several slices of the speculative fiction genre, ranging from secondary-world fantasy as Hobb, to urban fantasy and science fiction as Lindholm. She is best known for her fantasy novels set in the Realm of the Elderlings, for which The Times described Hobb as "one of the great modern fantasy writers". Her Farseer, Liveship Traders and Tawny Man trilogies have sold more than a million copies. Lindholm grew up in Alaska and the Pacific Northwestern United States, a setting that has influenced her work. She began writing novels at age thirty, in the midst of raising children. The first work to bring her wider attention was the 1986 novel Wizard of the Pigeons, a liminal fantasy set in Seattle. Often cited as a forerunner of the urban fantasy genre, it received praise for Lindholm's depiction of understated magic and poverty. Science fiction short stories followed, garnering nominations for the Hugo and Nebula Awards. Though critically well-received, Lindholm's work did not do as well in terms of sales, motivating the switch to an androgynous pen name, Robin Hobb, in 1995. Hobb achieved critical and commercial success with her debut work under this pseudonym, the Farseer epic fantasy trilogy. Narrated as a first-person retrospective, an unusual approach in fantasy, the Farseer novels have drawn praise for their characterization and introspective narrative. Critical attention on the series has focused on themes of otherness and queerness in Hobb's writing, and on the portrayal of femininity in the sequel Liveship Traders. The final Fitz and the Fool trilogy, with which the series concluded in 2017, continued to garner attention for Hobb's depiction of older characters, with The Telegraph arguing that her novels transcended the fantasy genre. In 2021, Hobb won the World Fantasy Award for Life Achievement.
Read more or edit on Wikipedia