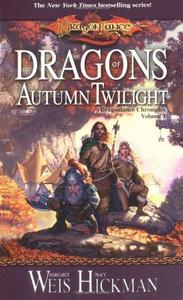 Dragons of Autumn Twilight is a 1984 fantasy novel by American writers Margaret Weis and Tracy Hickman, based on a series of Dungeons & Dragons (D&D) game modules. It was the first Dragonlance novel, and first in the Chronicles trilogy, which, along with the Dragonlance Legends trilogy, are generally regarded as the core novels of the Dragonlance world. The Chronicles trilogy came about because the designers wanted novels to tell the story of the game world they were creating, something to which TSR, Inc. (TSR) agreed only reluctantly. Dragons of Autumn Twilight details the meeting of the Companions and the early days of The War of the Lance. The novel corresponds with the first two Dragonlance game modules, Dragons of Despair and Dragons of Flame, but with a different ending. It introduces many of the characters that are the subject of later novels and short stories. The title Dragons of Autumn Twilight follows a pattern with the other novels in the series, Dragons of Winter Night and Dragons of Spring Dawning, as they all start with Dragons, followed the names of the seasons, Autumn, Winter, and Spring, as well as a series of time, Twilight, Night, and Dawning. Margaret Weis includes allusions to A Christmas Carol by Charles Dickens, one of her favorite stories. References include But there was something disquieting about him—secret, silent, self-contained, and solitary as an oyster and The fate of mankind is my business. This quote is turned from meaning good to meaning harm.
Read more or edit on Wikipedia