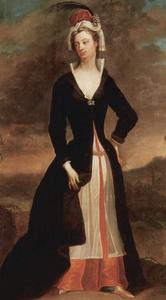 writer and poet from England, editor

Lady Mary Wortley Montagu (née Pierrepont; 15 May 1689 – 21 August 1762) was an English aristocrat, writer, and poet. Born in 1689, Lady Mary spent her early life in England. In 1712, Lady Mary married Edward Wortley Montagu, who later served as the British ambassador to the Sublime Porte. Lady Mary joined her husband in the Ottoman excursion, where she was to spend the next two years of her life. During her time there, Lady Mary wrote extensively on her experience as a woman in Ottoman Istanbul. After her return to England, Lady Mary devoted her attention to the upbringing of her family before dying of cancer in 1762. Lady Mary is today chiefly remembered for her letters, particularly her letters from travels to the Ottoman Empire, as wife to the British ambassador to Turkey, which Billie Melman described as "the very first example of a secular work by a woman about the Muslim Orient". Aside from her writing, Lady Mary is also known for introducing and advocating for smallpox inoculation to Britain after her return from Turkey. Her writings address and challenge the hindering contemporary social attitudes towards women and their intellectual and social growth.
Read more or edit on Wikipedia