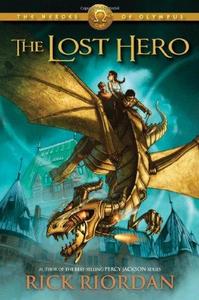 The Lost Hero is an American fantasy-adventure novel written by Rick Riordan, based on Greek and Roman mythology. It was published on October 12, 2010, and is the first book in The Heroes of Olympus series, a spin-off of the Percy Jackson & the Olympians series. It is preceded by The Last Olympian of Percy Jackson & the Olympians and followed by The Son of Neptune. The novel has since been translated into many languages and released as a hardcover, e-book, audiobook and paperback. The story follows Jason Grace, a Roman demigod with no memory of his past. He, along with Piper McLean, a daughter of Aphrodite, and Leo Valdez, a son of Hephaestus, are given a quest to rescue Hera, the queen of gods, from the clutches of Gaea, the primordial goddess of the earth. It is the first book in the Camp Half-Blood chronicles to use third-person narration, switching between the points of view of Jason, Piper, and Leo. The Lost Hero received positive reviews from critics for its complex and mature plot when compared to its predecessors. Criticism was focused on its streched action sequences and dialogues. At its peak, the novel has appeared first on The New York Times bestseller list, the USA Today bestseller list, The Wall Street Journal bestseller list, and the Publishers Weekly bestseller list. It was named the best children's book of 2010 by Barnes & Noble and won the Junior Young Reader's Choice Award in 2013.
Read more or edit on Wikipedia