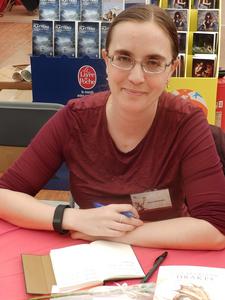 Marie Brennan is the pseudonym of Bryn Neuenschwander, an American fantasy author. Her works include the Doppelganger duology (Doppelganger and its sequel Warrior and Witch, respectively retitled Warrior and Witch on later printings); the Onyx Court series; the Memoirs of Lady Trent series; and numerous short stories. The first of the Onyx Court novels, Midnight Never Come, published on 1 May 2008 in the United Kingdom, and 1 June 2008 in the United States, received a four star-review from SFX Magazine. The Lady Trent series was a finalist for the Hugo Best Series award in 2018.As an undergraduate at Harvard University, Neuenschwander served as co-chair of the Harvard-Radcliffe Science Fiction Association. After graduating from Harvard, she pursued graduate studies at Indiana University Bloomington, studying folklore and anthropology; in 2008 she left graduate school without completing her PhD, in order to pursue writing full-time.
Read more or edit on Wikipedia