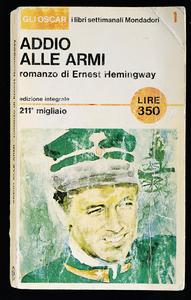 A Farewell to Arms

A Farewell to Arms is a novel by American writer Ernest Hemingway, set during the Italian campaign of World War I. First published in 1929, it is a first-person account of an American, Frederic Henry, serving as a lieutenant ("tenente") in the ambulance corps of the Italian Army. The title is taken from a poem by the 16th-century English dramatist George Peele. The novel, set against the backdrop of World War I, describes a love affair between the expatriate Henry and an English nurse, Catherine Barkley. Its publication ensured Hemingway's place as a modern American writer of considerable stature. The book became his first best-seller, and has been called "the premier American war novel from that debacle World War I."The novel has been adapted a number of times, initially for the stage in 1930; as a film in 1932 and again in 1957, and as a three-part television miniseries in 1966. The 1996 film In Love and War, directed by Richard Attenborough and starring Chris O'Donnell and Sandra Bullock, depicts Hemingway's life in Italy as an ambulance driver in the events prior to his writing of A Farewell to Arms.
Read more or edit on Wikipedia