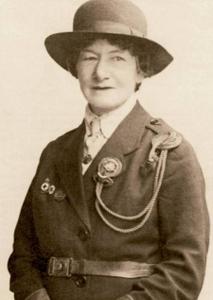 Agnes Smyth Baden-Powell (16 December 1858 – 2 June 1945) was the younger sister of Robert Baden-Powell, 1st Baron Baden-Powell, and was most noted for her work in establishing the Girl Guide movement as a female counterpart to her older brother's Scouting Movement.
Read more or edit on Wikipedia