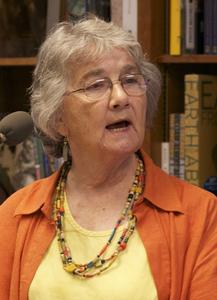 Katherine Womeldorf Paterson (born October 31, 1932) is a Chinese-born American writer best known for children's novels, including Bridge to Terabithia. For four different books published 1975-1980, she won two Newbery Medals and two National Book Awards. She is one of four people to win the two major international awards; for "lasting contribution to children's literature" she won the biennial Hans Christian Andersen Award for Writing in 1998 and for her career contribution to "children's and young adult literature in the broadest sense" she won the Astrid Lindgren Memorial Award from the Swedish Arts Council in 2006, the biggest monetary prize in children's literature. Also for her body of work she was awarded the NSK Neustadt Prize for Children's Literature in 2007 and the Laura Ingalls Wilder Medal from the American Library Association in 2013. She was the second U.S. National Ambassador for Young People's Literature, serving 2010 and 2011.
Read more or edit on Wikipedia