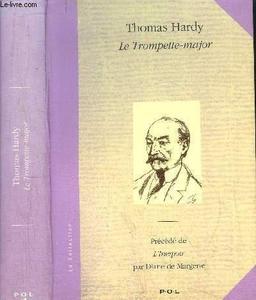 The Trumpet-Major is a novel by Thomas Hardy published in 1880, and his only historical novel. It concerns the heroine, Anne Garland, being pursued by three suitors: John Loveday, the eponymous trumpet major in a British regiment, honest and loyal; his brother Bob, a flighty sailor; and Festus Derriman, the cowardly nephew of the local squire. Unusually for a Hardy novel, the ending is not entirely tragic; however, there remains an ominous element in the probable fate of one of the main characters. The novel is set in Weymouth during the Napoleonic wars; the town was then anxious about the possibility of invasion by Napoleon. Of the two brothers, John fights with Wellington in the Peninsular War, and Bob serves with Nelson at Trafalgar. The Napoleonic Wars was a setting that Hardy would use again in his play, The Dynasts, and it borrows from the same source material.Edward Neill has called the novel an attempt to repeat the success of his earlier work Far from the Madding Crowd (1874), after the limited success of his intervening works. The novel originally appeared in 1880 in the Evangelical serial Good Words (January-December) with 33 illustrations by John Collier. The three-volume first edition was published in October 1880.
Read more or edit on Wikipedia