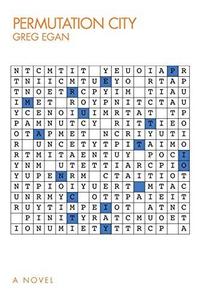 Permutation City is a 1994 science-fiction novel by Greg Egan that explores many concepts, including quantum ontology, through various philosophical aspects of artificial life and simulated reality. Sections of the story were adapted from Egan's 1992 short story "Dust", which dealt with many of the same philosophical themes. Permutation City won the John W. Campbell Award for the best science-fiction novel of the year in 1995 and was nominated for the Philip K. Dick Award the same year. The novel was also cited in a 2003 Scientific American article on multiverses by Max Tegmark.
Read more or edit on Wikipedia