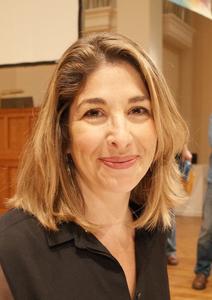 Naomi A. Klein (born May 8, 1970) is a Canadian author, social activist, and filmmaker known for her political analyses, support of ecofeminism, organized labour, left-wing politics and criticism of corporate globalization, fascism, ecofascism and capitalism. On a three-year appointment from September 2018, she was the Gloria Steinem Chair in Media, Culture, and Feminist Studies at Rutgers University.Klein first became known internationally for her alter-globalization book No Logo (1999). The Take (2004), a documentary film about Argentina's occupied factories, written by her and directed by her husband Avi Lewis, further increased her profile, while The Shock Doctrine (2007), a critical analysis of the history of neoliberal economics, solidified her standing as a prominent activist on the international stage. The Shock Doctrine was adapted into a six-minute companion film by Alfonso and Jonás Cuarón, as well as a feature-length documentary by Michael Winterbottom. Klein's This Changes Everything: Capitalism vs. the Climate (2014) was a New York Times non-fiction bestseller and the winner of the Hilary Weston Writers' Trust Prize for Nonfiction.In 2016, Klein was awarded the Sydney Peace Prize for her activism on climate justice. Klein frequently appears on global and national lists of top influential thinkers, including the 2014 Thought Leaders ranking compiled by the Gottlieb Duttweiler Institute, Prospect magazine's world thinkers 2014 poll, and Maclean's 2014 Power List. She was formerly a member of the board of directors of the climate activist group 350.org.
Read more or edit on Wikipedia