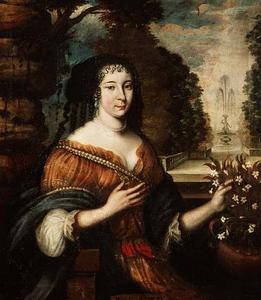 Madeleine de Scudéry (15 November 1607 – 2 June 1701), often known simply as Mademoiselle de Scudéry, was a French writer. Her works also demonstrate such comprehensive knowledge of ancient history that it is suspected she had received instruction in Greek and Latin. In 1637, following the death of her uncle, Scudéry established herself in Paris with her brother. Georges de Scudéry became a playwright. Madeleine often used her older brother's name, George, to publish her works. She was at once admitted to the Hôtel de Rambouillet coterie of préciosité, and afterwards established a salon of her own under the title of the Société du samedi (Saturday Society). For the last half of the 17th century, under the pseudonym of Sapho or her own name, she was acknowledged as the first bluestocking of France and of the world. She formed a close romantic relationship with Paul Pellisson which was only ended by his death in 1693. She never married.
Read more or edit on Wikipedia 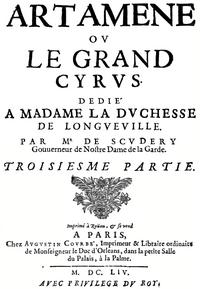 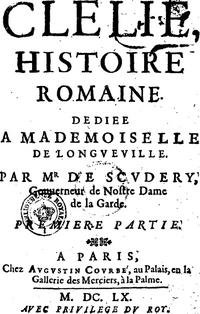