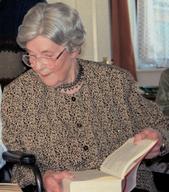 Edith Mary Pargeter (28 September 1913 – 14 October 1995), also known by her nom de plume Ellis Peters, was an English author of works in many categories, especially history and historical fiction, and was also honoured for her translations of Czech classics. She is probably best known for her murder mysteries, both historical and modern, and especially for her medieval detective series The Cadfael Chronicles. Source: Wikipedia (en)