Jean-Baptiste François Xavier Cousin De Grainville (3 April 1746 – 1 February 1805) was a French writer who wrote a seminal work of fantasy literature: Le Dernier Homme (The Last Man) (1805). This was the first modern novel to depict the end of the world.The son of an army staff officer, de Grainville was born in Le Havre and was destined for the priesthood, like his brother, who became Bishop of Cahors. After attending school in Caen, he attended the Lycée Louis-le-Grand in Paris. De Grainville was ordained a priest in 1766 but left the priesthood during the French Revolution. He committed suicide at Amiens in 1805 and his novel was published posthumously.
Read more or edit on Wikipedia 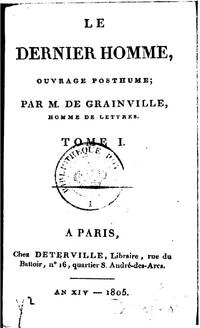