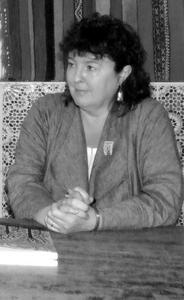 Dame Carol Ann Duffy (born 23 December 1955) is a British poet and playwright. She is a professor of contemporary poetry at Manchester Metropolitan University, and was appointed Poet Laureate in May 2009, resigning in 2019. She is the first woman, the first Scottish-born poet and the first known LGBT poet to hold the position.Her collections include Standing Female Nude (1985), winner of a Scottish Arts Council Award; Selling Manhattan (1987), which won a Somerset Maugham Award; Mean Time (1993), which won the Whitbread Poetry Award; and Rapture (2005), winner of the T. S. Eliot Prize. Her poems address issues such as oppression, gender, and violence in an accessible language that has made them popular in schools.
Read more or edit on Wikipedia